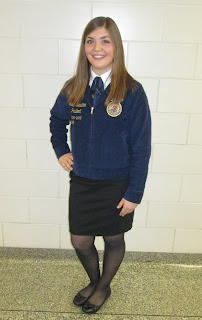 Allison is a junior at New Ulm High school, loves the color orange, and is currently serving as her FFA chapter's President. Allison was drawn to the organization by the positive environment it displays, and all the activities it has to offer. Her sister Abby was the one who encouraged her to get involved. As an eighth grader, Allison kicked off her FFA journey competing on the General Livestock Judging team. In her words, she "fell in love with the organization" and has been heavily involved ever since. She even mentioned that she missed two days of a family vacation in Florida to participate in her Region Creed Speaking Contest!

Throughout her years in FFA, Allison has had quite the accomplishments! She has participated in General Livestock Judging, Creed Speaking, Best Informed Greenhand, and Public Speaking. She has made it to state twice for General Livestock Judging and also earned a trip for placing first in her region's Creed Speaking contest! In addition to her CDE involvement, she has attended many other FFA events. Including state and national conventions, SGLC, SLCCL, chapter corn drives, ditch clean-ups, chapter banquets, parades, crop shows, lock-ins and many more. 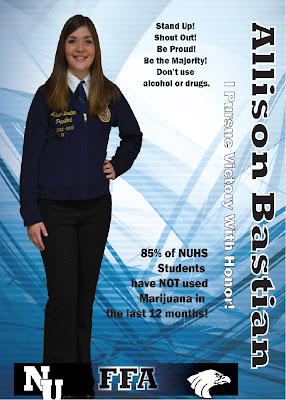 While involved in FFA events and agricultural education, she has impacted her community in a number of different ways. Allison has done her best to be a good motivator and role model throughout her school. She was even featured on a poster in her high school called Character Counts for continuing to make good choices and serving as a leader to those around her. To stay active in her community she helps with her school spring Ag Show and Farm Show to be a positive agricultural advocate to the public. She makes a point to always re-enforce the importance of agriculture and leadership, as well as opportunities that both provide. 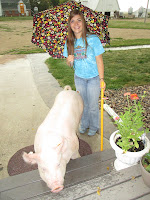 Allison credits her FFA Chapter for giving her so many experiences that have helped her to learn and grow. She has grown in many ways, from learning general concepts about agriculture to learning how to professionally conduct a radio interview. In her own words, "FFA has given me the opportunity to meet people with the same interests as me and helped me gain some very meaningful friendships." In turn from what she has gained from her FFA chapter, Allison continues to give back to help her chapter grow.  She participates in a recruitment fair for 8th graders at her school and writes for her town journal to publicize the achievements of the New Ulm FFA Chapter. 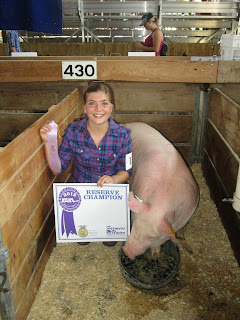 Allison plans to go to school for Animal Science in hopes to be a swine specialist and return home to take over her family farm. Always Learning to Do, Doing to Learn, Earning to Live, and Living to Serve; Congratulations to our FFA Member of the week... 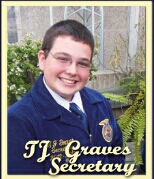 Name: T.J. Graves
Chapter: Brainerd FFA
Year in School: Junior
Favorite Color: Orange
Fun fact: T.J. moved to Minnesota from Illinois about four years ago.
In 2010 T.J. was off to try out something new, something called FFA. Knowing that his family had been involved in FFA as well in the past, T.J. was ready to give it a shot. T.J. knew he had a passion for agriculture and, realized that the FFA would be a prime place to learn about, and work hands on with agriculture. 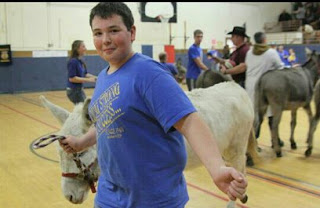 T.J. wasted no time getting involved with FFA, and by involved we’re talking all out. Just to name a few things he’s been involved in so far, T.J. has been to not only two state conventions, but national convention as well. This past summer T.J. also attended SLCCL in Hackensack, MN where he was able to acquire more leadership skills as well as meet new friends from across the state. Most recently T.J. applied and was accepted to attend Ag Policy Bootcamp, where he was able to learn about current agricultural policies and meet with legislators. Last year because of his involvement with the FFA and his strong SAE, T.J. was even awarded the Star Chapter Farmer. All of these things are simply a precursor to his future goal of becoming a State FFA Officer.


Although T.J. has a passion for participating in agriculture his favorite thing to do is to be able to meet new members and friends with the FFA. T.J. realizes that FFA is a mutual beneficial program for himself and his chapter. T.J. is the chapters’ secretary as well as the chapters’ PALS co-chair. On the flip side, FFA has been able to help him by awarding him several grants to start his SAE project, TJ’s Lawn Care. 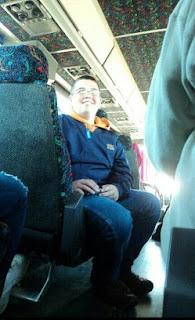 T.J. is a true example of some of the things an FFA member should do. T.J. makes an agricultural impact through FFA by interacting in agricultural classes, and then sharing his agricultural knowledge when he participates in community events. Not only can T.J. help in his community but he uses his time to help improve the chapter by doing things such as diversifying the chapters’ social media such as making a chapter website as well as a chapter Facebook page.

Congratulations to T.J Graves, this weeks FFA member of the week!!
Posted by Minnesota FFA State Officer Team at 11:29 AM No comments:

As the state officers on ILSSO rode across the Argentinian Pampas, I remember someone commenting on just how close this looked to home. Soybean fields stretched across the flat lands. Trees popped up marking the farmer's houses and buildings.

Argentina is the world's third largest producer of soybeans but they export most of what they grow. They also produce a lot of high quality beef, are the leading producer of lemons, grow wine grapes in the Andean foothills, and grow significant amounts of sunflowers and corn. Although the Pampas may have looked similar to the United States, there were differences in how they grew their crops. Exploring their agriculture opened my eyes to the fact that we as an industry still have growing to do. In the United States, farmers are exceptional at what they do and take pride in their work, however we are not perfect. Just as Argentinian farmers have much to learn and ways to benefit from us, so we have lessons to be learned from them. 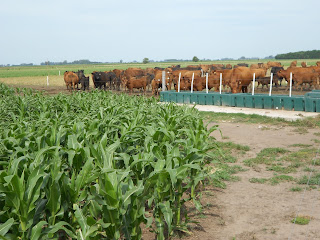 During our trip we visited a crop and beef farm, a show sheep operation, and a dairy. Although some of the practices differed (they tended to graze more, they used fewer fertilizers on crops) it was obvious they took pride in the work they did to feed the world. They, just like us, want to produce a high quality product. They, just like farmers here, want to raise their families to value hard work and honesty. 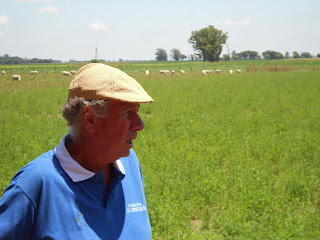 Later we had the opportunity to see some of the agribusiness. Touring the T6 soybean crushing facility and the Buenos Aires Livestock Market was awe-inspiring. Not only was T6 state of the art,  but it was responsible for crushing 19% of the country's soybean meal. Both facilities were massive. The livestock market had the capacity to hold 50,000 head of cattle. These businesses reflected the magnitude and importance of agriculture to the Argentinian economy. 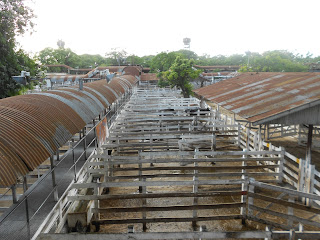 Finally, we were privileged to see Iguazu Falls in the north of the country. It is a sight that cannot be given justice through words or photographs. 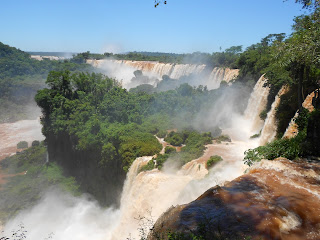 There was more to the trip, from seeing their culture at a Gaucho ranch, to experiencing the hustle and bustle of the city. At the end of the day though, there are a few things that this trip highlighted:

1. Don't assume your opinions of other places or people are correct, travel and find out for yourself
2. Agriculture is incredible. Nearly everyone, everywhere can find a link to it.
3. There is more than our way of practicing agriculture. Different is simply different, it isn't better or worse.
1. People- everywhere- are people. Beyond the culture, we have a lot alike. 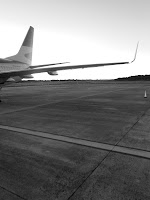 So there you have it. Nine days, a few thousand miles, eight flights, and many friendships later, what has been gained from one incredible trip.

Respectfully submitted from the emblem of Washington.
Dare to Do,
Nathan Eli Daninger
Posted by Minnesota FFA State Officer Team at 1:35 PM No comments:

FFA Member of the Week: A Passion for Dairy, and Agriculture as a Whole!

Morgan has been in agricultural organizations from an early age starting with 4-H. When the opportunity came to be able to join FFA it seemed to be a “Natural fit” to help develop and enhance her leadership skills. Being that her family is very involved with FFA in the community; her family was also very supportive of Morgan joining the Buffalo Chapter.
Morgan, growing up on the family dairy farm, has definitely learned something from all her experiences, and that is to work hard. Morgan’s involvement in Creed Speaking, Dairy Evaluation, Ag. Policy Bootcamp, 360 conference, and showing dairy cattle at both the county and state level, is a prime example of just how driven and hardworking Morgan is. This summer Morgan was also the only one from her chapter to attended State Greenhand Leadership Conference where she was able to expand her leadership skills as well as meeting tons of new FFA friends. She also hopes in the future to have the privilege to attend Washington Leadership Conference as well as take on Leadership roles in FFA.
Through all of Morgans experiences with FFA her favorite part is being able to meet new people who share common interests. Morgan contributes becoming a better speaker and leader to her participation in FFA, as well as the pathway to meeting several of her friends. From her experiences Morgan also enjoys being able to help and encourage to others in any way she can. For example, the past two years Morgans family farm has been the host for the Buffalo Chapters Corn Drive for Camp Courage, which last year, was the most successful corn drive the Buffalo FFA chapter has ever had!
Morgan not only talks about her passion for agriculture and FFA, but does a fine job of showing it as well. As a FFA member she helps with Wright County Breakfast on the Farm, an event that hosted over 2,000 people on a Saturday during June dairy month. The event teaches the non-farm public of the everyday practices on a dairy farm, which is critical for our generation to do. As a result, this event has been able to help clear up some of the misconceptions people have about agriculture.  Another glistening example is when her officer team spoke before the school board giving them insight on all the leadership activities our chapter is involved in. “It was a great opportunity to share our stories with community members who haven't heard it.”
On top of all of her FFA events Morgan still makes time to try and help out around home on her families 350 cow dairy farm, where they will soon be moving into our new free stall barn. Their family farm was even named Dairy Farmers of America Family of Distinction for the central area council in 2013. “I think FFA is an amazing organization and I am proud to be a member.”
Congratulations to Morgan Krause, this week’s FFA member of the Week!!!
Posted by Minnesota FFA State Officer Team at 10:26 AM 1 comment: