Make It A Habit

This summer has been a wild and crazy ride. Beginning in June with SGLC and SLCCL, going into July with inTENse and the State Officer Summit, and now in August with FarmFest and my first ever officer retreat, I have been on the road a lot! One thing hasn’t changed, no matter where I may be sleeping; my habits. No matter what, when I wake up, the first thing I do is think of the day ahead and make a plan of the items I need to accomplish. Then I brush my teeth, take a shower, and get dressed. Again, at night, I sit down and go through my mind, asking myself if I accomplished the things I set out when I woke up. These are things I do every day, no matter how early I get up or how tired I am, they are habits. 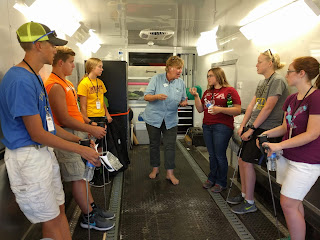 While I was on the inTENse conference in July, traveling the state and exploring colleges and careers with some of my favorite 10th and 11th graders, I ran into a bit of trouble. On the first and second day of the trip, Sunday and Monday, I had hyped up the fact that I had taco tuesday socks, and I would wear them on Tuesday. Almost all of the students on the bus were excited for me to walk out of my room in the morning and be showing off my socks. Well… when I got to my room Monday night and looked to take my taco socks out of my luggage, I was met with a realization that I had forgotten them at home. As Tuesday morning rolled around and I came out of my room, I was asked to show off my socks. I tried to come up with an excuse, but couldn’t. We ate tacos for three of our next four meals, and it became common knowledge that I had cursed the bus by promising to wearing taco socks and then not following through with that promise. 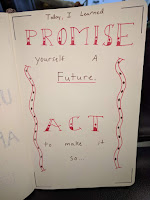 Habits are like promises we make to ourselves, good or bad. When we follow through, everything works as it should. When we don’t, however, we get cursed (or so I’ve been told). I began the summer with a couple projects that I wanted to become daily habits. Every night, I would sit down with my journal and some pens and write a journal page, and I would post it on Instagram the next day. As the summer went on, however, it became easier and easier to forget to do it or make an excuse for the day. “I’ll do it tomorrow for sure” became an almost daily saying. Each time I broke the promise to myself, when I didn’t follow through on the habit I wanted to create, I felt like I was hurting myself.

I’ve continued to struggle with maintaining some of these newly formed habits, but I always feel better while I am doing it and after. I know that I’ve upheld the promise I made myself and it will be easier to do again the next day. Habits are a way for us to get better at something every day. Even for those of us who seem to not have much time, a five minute habit every day can make a world of difference. I will challenge you with the same challenge I am trying to hold myself to: Promise to do something to improve yourself every night for 5 minutes before you go to sleep. Make it a habit.
Posted by Minnesota FFA State Officer Team at 2:46 PM