Ashby School District agriculture instructor and FFA advisor had an idea a few years ago to make his instruction more hands on. His vivid idea is now a garden which doubles as a food source and instruction tool for the students in the PreK-12 school. Dustin Steenblock is the agriculture instructor at Ashby High School, his love of agriculture started young. The upbringing on his parent’s farm helped him get where he is and wants to give students some of those same opportunities. 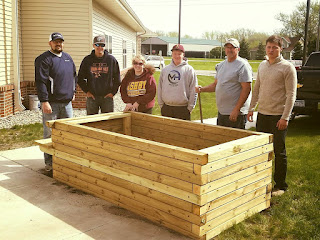 The Ashby School garden complex is comprised of a 100 foot x 100 foot garden, a 30 foot x 36 foot high tunnel, and eight raised garden beds for community use. There are also composting systems and storage, prairie garden raised beds, and a 24 tree apple and plum orchard. To top it off, there is an outdoor classroom consisting of raised vegetable garden beds, rain collection system, and a 10 foot  x 20 foot indoor grow/starter room. All of this is managed by the students and Steenblock.
“We give the kids the opportunity to help them find what they are going to succeed in life,” said Steenblock. 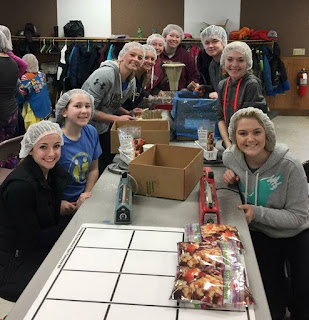 The majority of the work done with the gardens is by the sustainable agriculture class offered to the students. The class curriculum was developed and added to the high school schedule for the 2011-2012 school year in a trial, semester-long course. The class has been popular and has continued to be offered by the district ever since. Instruction includes multiple forms of learning and settings. Units of the course were very encompassing and included skills for small scale production and processing of goods, with a heavy concentration on vegetables, as
well as focusing on creating and the benefits of a fresh, local, and healthy food supply.
Steenblock said the classes work to provide as much of the produce to the students and staff as possible. Some of the plants like their tomatoes will not start growing until the late summer and fall that way more students can help with the harvesting and preserving. Other produce is planted in the spring, and what cannot be preserved for the next school year is sold at local farmers markets and brought to the food shelf.
The school is able to maintain their hands on learning by having all the students PreK-12 in one building. There are about 20 students per grade keeping the teacher student ratio low. As for FFA, their successful program includes about 50 members from grades 8-12.
Over 260 Students, 40 staff, and eight community garden families are directly impacted by the program and gardens. Students and staff create a sustainable, local food supply on school grounds by taking ownership in the entire process of growing the food. One of Steenblock’s favorite aspects of gardening is seeing the tiny seed planted eight weeks ago bloom into something that will eventually provide nourishment for others. This produce, partially processed by students, creates a healthy supplement to meals and snacks served at school.
The garden site also supplements instruction in every grade of the school. A large portion of that is for K-2 and 11-12. This instruction focuses on aspects of vegetable planting, growth, maintenance, insect relationships, processing, and consumption with the greatest benefits coming from the hands-on experiences.

Posted by Minnesota FFA State Officer Team at 7:00 AM 1 comment:

Minnesota has one of the largest Hmong-American populations in the United States.


By 1980, Hmong farmers moved to the metro areas of Minnesota, revitalizing the urban farmers markets. Hmong refugees settled from Laos and Thailand to Minnesota following the Vietnam War.


Pakou spoke at the second general session of the 2017 Minnesota FFA Convention. In her keynote address, Pakou spoke on behalf of Hmong farmers and their role in Minnesota agriculture.


“It is great to work in agriculture, a field that encourages people to grow, produce and provide food for others,” said Pakou.


Pakou has worked for more than 12 years as a community organizer and graduated from the University of Minnesota in 2008 with a Masters in Political Science. She obtained her undergraduate degree from Yale University in 1999.


The farm is a 155-acre research and incubator farm, just 15 miles south of St. Paul, near Minnesota Highway 52. HAFA sub-leases the land to its members while maintaining research and demonstration plots to provide continuing education in sustainable agricultural practices to its member-farmers.


The HAFA Farm began in 2013. Since it’s start, HAFA has begun implementing sustainable agricultural practices such as composting, succession planting, installing grass roadways and laying of erosion blankets. The HAFA farm has a plan for bees, supplying a whole farm pollinator.


According to a recent study, funded by the United States Department of Agriculture (USDA), Hmong American farmers make up over half of all producers at farmers markets in the Twin Cities’ metropolitan area. Nearly 40 percent of the food produced at the HAFA farm go to a the farmers markets. The remaining 60 percent remain within the Twin Cities, donated to more than 120 schools and community groups.


“We farm for the same purpose as the large-scale farmer,” said Pakou . “We value the importance to feed people.”

Posted by Minnesota FFA State Officer Team at 7:00 AM 1 comment:

The average Minnesota FFA member attends two state FFA conventions during their time in FFA. Charles Funk has attended 53 state FFA conventions -- consecutively.
Charles Funk, a retired agricultural educator, grew up in Sebeka where he attended school and got involved with the FFA chapter. At the age of 16, Charles was planning to quit school. That fall, he attended the National FFA Convention in Kansas City, Mo.
“At the time, National FFA had a quota on the number of students that were able to attend,” said Charles. “It was either the 10 percent of membership or six students, whichever was greater.”

Charles’ friend, Tom, who later became Minnesota FFA State President, encouraged him to go to the National FFA Convention.
Charles said, at first he couldn’t put his experience into words.
“It was undoubtedly the best students who attended convention because of the quota restriction,” said Charles.
Charles graduated with an agricultural education degree from the University of Minnesota in 1971. His teaching experiences span from 1970 to 2011.

“I taught at Motley High School, before they merged with Staples for 16 years,” said Charles. “After Staples, I taught at Sebeka for 20 years.”
Following his time at Sebeka, Charles taught an independent class for five years at the Menahga High School. 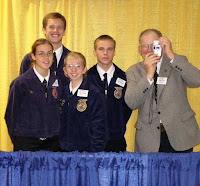 “I was teaching when many of these [current] ag teachers were students,” said Charles . “As they’ve grown up, we’ve become co-equals. It adds a competitive side to it, too.
Charles has witnessed the transformation of state convention and Minnesota FFA over the years.
“I’m an FFA junkie,” said Charles.
From solely being on the St. Paul campus to expanding to the Minneapolis side, Charles navigates through the University of Minnesota every April.
“[Minnesota FFA] has more students involved, resulting in a need to expand beyond the St. Paul campus,” said Charles. “There was usually a catered banquet to the awards ceremony. The general sessions were in the gymnasium, and the talent show was in the North Star Ballroom.”

The growth excites Charles. There are more opportunities for students to be involved with proficiencies, Career Development Events and leadership workshops.
“Because of FFA, I went from a kid who was going to quit school to a life-long learner,” said Charles..
Through his involvement in FFA and service, Charles received the Honorary American FFA Degree. He was awarded the degree when the first female National FFA President, Jan Eberly, served.
Although Charles is retired, he still remains involved and connected with the local FFA chapters. This past year, Charles helped with the Staples-Motley FFA Chapter officer interviews. He played a role to nominate the Sebeka school superintendent to serve on the Minnesota FFA Association adult board.

Charles is married to Cheryl Funk and father to Edric, Aaron, Sarah, Stephen, Maria and Paul. Edric and Stephen served as Minnesota state FFA officers. His son-in-law, Miles was awarded the Stars Over America in Ag Placement when he was a member. Stephen and Maria are agricultural education teachers in Mountain Lake and Menahga, respectively.

Posted by Minnesota FFA State Officer Team at 8:54 AM 1 comment: