Nation Officer Candidate Training
When I arrived at Dassel-Cokato High School early in the morning on October 6, I was shocked to see that apart from Mr. Sawatzke, the FFA Advisor, I was the only one there! He gave me a run-down of what was going on that day and gave me a short tour of the surrounding rooms that we would be using. By the time we had completed that members began to flow in and I was able to see some members that I hadn’t seen in quite a while such as Linsey Strolberg, and Steven Johnson that I haven’t seen since summer leadership camps. We got to work preparing for the day as the National Officer Candidates from seven different states arrived ready for a day of training. It was educational for me to sit through the different rounds of interviews that these members took part in, but more than anything it gave me confidence in the future of the National FFA Organizations. These seven individuals took of their own time to train for this position of service. Service, has become a way of life for these men and women. And come October, I know that no matter who ends up standing on that stage, the National FFA Organization will be in good hands! To bring an end to what was certainly a fun and educational day, we had some good old fashioned dancing! Everything from the Jasper leading us in the Dougie, to country swing and line dancing!
Stationed by the Flag, 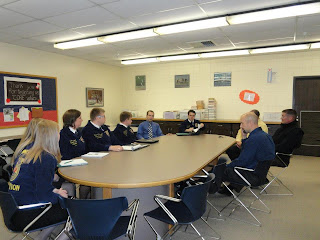 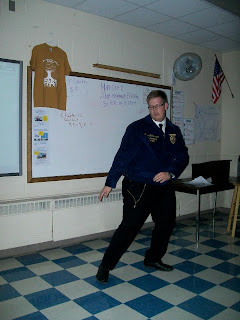