~ Grab Opportunity by the Hair ~
Each day we are faced with hundreds of decisions.  What to eat for breakfast, which shirt to wear, what to put for number 6 on the math quiz, and more.  Some of these decisions are small and some are much bigger.  For instance, one decision that all FFA members are faced with whether or not to get involved in this organization.  Since we made that decision, we’ve been faced with so many more: which Career Development Event to involve ourselves in, if any. Whether or not to run for office, or what our Supervised Agricultural Experience should be. It is in the moments when we are faced with decisions that we are faced with opportunities.


Over 400 FFA members and officers descended on Mountain Lake in Minnesota for the Region VI Greenhand/ Chapter Officer Workshop Day on September 26, 2012.  Over 350 of these members were Greenhands and this was their first event outside of their chapters.  The other members were Chapter Officers, who were there for the Chapter Officer Workshop also known as COW.  The Region Officer team was really focusing on encouraging these members to “seize the day” and to take advantage of the opportunities they would be exposed to throughout the day.


When I heard what they were focusing on for the day, I was reminded of the Opportunity Statue from Ancient Greece.  The statue shows the figure of a man who has long flowing hair on his face and the front of his head, but the back of his head is completely bald.  The idea was that while Opportunity is walking towards you, you can reach out and grab a hold of it. However, once it has passed you by, there isn’t anything left for you to grab.  As I shared this story with the members there that day, I dared them to continually remember to “grab Opportunity by the hair”. 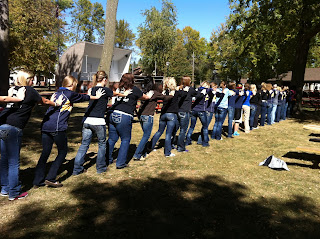 Throughout the day it was obvious that they were taking this dare seriously.  In the COW, the Chapter Officers stepped up and worked hard to develop skills that they will use throughout their year of service.  They thought about and discussed ways to accomplish their goals for their chapter, strategies they could use to keep each other accountable, and participated in activities which strengthened their teamwork skills. 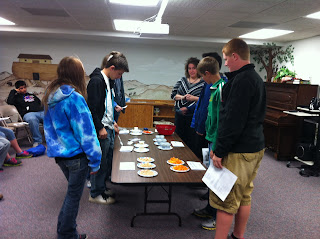 While Shawna and I were working with the Chapter Officers, the Region VI Officers were facilitating workshops for the Greenhands.   These officers covered topics such as Basic FFA Knowledge, Casual Official Dress and Official Dress, Career Development Events, and Leadership Opportunities.  The Greenhands reached out and grabbed Opportunity by the hair through the excitement they displayed when offered a chance to experience some of the CDEs. They also learned many new things and gained helpful skills for their future.
Later when Shawna gave her reflections of the day, I could tell that many of the FFA members had taken a hold of the biggest opportunity available to FFA members, the opportunity to be a part of the accepting atmosphere of FFA.  This was evident by the way they genuinely laughed during the funny parts of Shawna’s stories. Instead of the tension I had felt at the beginning of the day, these students had grown comfortable enough to express their inner emotions. These members had figured out that FFA was a place where they could really open themselves up and be themselves.


The over 400 FFA members at the Region IV Greenhand/Chapter Officer Workshop Day dared to grab Opportunity by the hair, will you?
Stationed by the Plow,
Marjorie Schleper
Posted by Minnesota FFA State Officer Team at 7:08 PM