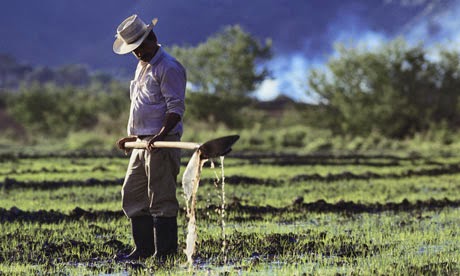 Recently during my Global Food Systems class, my entire class was reading a book all about world food shortages and hunger.  In the very first chapter, the author talked about his trip to Columbia.  During his trip, he was trying to help the people there become more sustainable so they could better feed their families as well as have a surplus to send to market.  One of the people who wanted his help the most was a man named Julio.  He worked with Julio and his wife, Imelda, to make their land more profitable.  His help made the family prosper and in turn, gave him the opportunity to buy two piglets to raise and sell or eat.  When the author returned a few months later, one pig was already sold, and he asked what Julio would do with the other.  Julio told him about a widowed neighbor woman who had two children, one of which was sick.  He was selling raffle tickets for the pig in order to raise as much money as he could in order to get the woman’s garden started and fix a leaky roof.  While I was reading all of this, it made me think about the sacrifice Julio was making.  He could have sold or ate the pig, and it would have made a difference because even though he was doing a lot better, he and his family were still well below the poverty line.  I wondered if I could have made the same sacrifice if I were in his shoes.
After our class discussion about that story and topic, I thought about my time in South Africa only a few weeks ago.  I thought about two young boys that were in a very poor part of the town of Soweto named Kliptown.  When we arrived, we saw how little these people had.  We got the chance to play with the children there for a while, and I played football with the two boys.  To be honest, the reason I was teaching them football and not playing soccer was because I fell twice when trying to play soccer.  Nevertheless, we were playing football with a ball the FFA had brought, but our time in Kliptown ended faster than any of us wanted.  I hugged the boys and as I was walking away, they ran after me, giving me the ball back.  They could have easily taken it without any trouble.  I was amazed by what the boys had done, but the ball was supposed to be given to them.  When I told them it was theirs, their faces lit up with joy, they hugged me, and they proceeded to play the game I had just taught them.  They had shown almost the same giving desire as Julio but in a different way.  They wanted to give whatever they could to their neighbors and even the people they just met.  In this case, what they gave me was a combination of happiness and pride in the youth of the world. One final story I think you should look at is this video.  I think there is no need for any description. https://www.youtube.com/watch?v=AUBTAdI7zuY


All three of these stories involved people with little or no money.  However, these people didn’t let circumstances dictate who they were and the person they wanted to be.  Each one showed true compassion toward other people through giving.  I even question myself if I would do the same in their shoes.  Would you do the same?  If a camera followed you around, would people be moved by your actions?

Stationed by the door,
Dalton