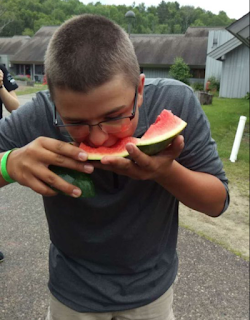 There is a traditional phrase that reads, “Victory is Sweet.” Whenever I hear this phrase, I instantly feel more competitive or motivated to try harder. As FFA members, there are many opportunities for us to taste that victory;, we simply have to know how to get there.

At the State Leadership Conference for Chapter Leaders, I met a sophomore from Lakeview named Payton. On the night of the dance, we had a watermelon feed. After we learned “The Watermelon Crawl,” we all raced outside to claim the biggest piece of watermelon we could find. My friend Payton was as excited for the watermelon feed as I was, so we put our watermelon skills to the test. He was already at 19 slices, which was impressive in itself. However, I challenged Payton to eat 23 slices of watermelon. To put this into perspective, I was full after nine slices.

Before he started the 20th piece, he began to slow down. Each piece took a little bit longer, and he told me he was getting full. Being the competitive person I am, I told him he couldn’t quit now. “You are so close – you can do it!” After this small encouragement, his pace picked back up again. I saw a grin on his face, and his effort skyrocketed.

Soon enough, he had devoured 23 slices of watermelon. He made the goal I set for him! But Payton did not stop there. He kept eating, faster than he had finished the first 23 pieces! He pushed himself to his limit and came out a champion.

Payton’s success reminds me of my own experience starting a Dairy Cattle Evaluation Career Development Event team. When I was a freshman in high school, I made a goal to establish a Dairy Cattle Evaluation team my sophomore year. I was so excited; I love dairy cattle and have shown them for years. Nothing would be better than if I could start a dairy team in my chapter! Despite my excitement, I soon found that it was not going to be an easy thing to achieve.

For five months, I struggled making a complete team. Some of the team members didn’t want to practice, while others had obligations elsewhere. One week before the region event, one of the team members decided not to compete. When each of these challenges came up, I felt as though my goal wasn’t going to be reached. Much like Payton, I thought I had all I could handle. I wasn’t eating watermelon, but I was full. Full of disappointment.

After a lot of work and encouragement from my advisor, I found an eager member to join the team. We studied as much as we could that week, and ended up qualifying for the state convention! I not only achieved my goal of starting a dairy team, but surpassed it by qualifying for state. Much like Payton, I tasted the sweetness that came with the victory of exceeding my goal.

Within the next month, many of us will be starting school again. For FFA members, this means studying for Career Development Events, recording hours for our Supervised Agricultural Experiences, or recruiting new members. What is that one thing that you want to accomplish in school or FFA? No matter the task, there are a few things to keep in mind as we reach for that sweet taste of victory.

In order to be successful, we must set goals. No matter what we want to achieve, it is important to have our eyes set on the prize. When we clearly see the end result we desire, it is that much easier to navigate towards. Goals can originate from all different sources too. For Payton, it came in the form of encouragement from those around him. For me, it was a personal drive that pushed me to start something new.

In the process of achieving our goals, we are going to experience low spots, or challenges. Much like Payton and I faced trials on our journey to reaching our goals, each one of us will be forced to deal with uncontrollable circumstances. This is often referred to as life. Think about the end goal and what it will feel like once you reach that destination. Keep that feeling close as you endure each challenge that might come your way.

Last but not least, remember the struggle will be worth it. When it’s all said and done, the destination is what we were aiming for. The challenges we went through to reach that point no longer matter. Here’s the bonus: if we work hard enough, we won’t simply reach our goals, we will exceed them. Just as Payton and I surpassed our goals, working through low spots with all of our effort gives us the ability to reach new heights with our goals.

Now think back to that one thing that you want to accomplish. As we begin another year, let’s try to focus on our goal by reminding ourselves of it daily. What will help you keep your focus on that goal? Remember to embrace the low spots and more importantly, allow them to encourage us to exceed our goals. How can you take your challenges and turn them into positives? What extra steps will you take to surpass your goal? My challenge to you is that by the end of the year, we will each be able to say that “just like watermelon, victory is sweet.”

Stationed by the Flag,