No, Seriously We Have a Spreadsheet...

It was all because of a mouse. A simple drawing that came to life on a screen that allowed Walt Disney to pursue his dream. We often associate Walt DIsney with dream,because Disney was a man with big plans and even bigger dreams. For me it always seemed like a mystery how one man could accomplish so many of these dreams in his lifetime. I was really good at picking a dream, and well, dreaming that dream for a long time, but I never got closer to that dream. Why? It was simply because I never really had a plan to get there in the first place, and more importantly, I didn't have people to help me get there. But good old Disney was a wonderful man and leader, because he had qualities I lacked; where I had only a dream, Disney had a dream, a plan, and a team. Making his dreams happen, and more importantly, making the others around him dream just as big as him. Disney had the ability to unite people over a common goal.

So, if you haven't noticed already, I LOVE Disney and it just so happens that most of my friends also love Disney. So naturally we came up with a little dream to get together and watch as many Disney movies as we could. So, as often as we could, we would gather at one house and watch as many movies in one night as possible. Now, if the thought “cute” crossed your mind, imaging a bunch of high school seniors crowding onto one couch watching Finding Nemo and Hercules, let me explain a little more. We took this endeavor very seriously. We have a spreadsheet. Let that sink in,

because, no, seriously we have a SPREADSHEET. This spreadsheet not only marks attendance and what movies we watched, but it is also color coded. We also had a very strategic voting system for choosing movies that involved paper ballots and goldfish. Well, if you are not laughing too hard yet, because I know it sounds silly, it was actually quite enjoyable. And now that we have all graduated and left home, I miss Disney nights so much. I don't even miss watching the movies, but I miss the girls and the time we spent together: laughing, eating Patty Jo`s amazing food (thanks Momma Erickson!), and telling our favorite stories. And even though it is only in a simple (and some might think silly) way, these girls and I gathered under one thing we loved, Disney movies. We united as friends and fellow Disney lovers to accomplish a goal. Because we were able to do this, we ended up watching lot of Disney movies and accomplishing our dream of enjoying being a kid a little bit longer.

It might seem like Disney made his dream a reality fairly simply and with ease, but he had to work just as hard as the rest of us. On one occasion, Disney wanted to design a place where dreams could come true. A place of Disney's own creation; a world to be precise. One of Disney’s famous quotes shares how he made his dream a reality; “You can design and create, and build the most wonderful place in the world. But it takes people to make the dream a reality.” So he assembled a team to make it happen, and then they created a plan. However, to make his dream a reality he needed one more person on his team, that man was Admiral Joe Fowler. A master at designer and construction of naval ships, and he could help Disney make his dream come true. So naturally Disney was going to stop at nothing to get Admiral Fowler to help him. After pursuing him once only to get rejected, Disney did not give up on his dream so easily. He kept pursuing Fowler, until he believed in Disney's dream as much as Disney himself. It is because of this skill of uniting a group of people under one common goal that made Walt Disney's career so incredible. 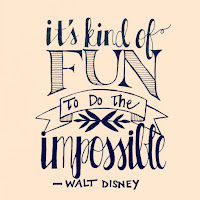 As FFA members, we know how important community is and how even more important it is to actively help improve our communities. We are given a place to dream of bettering our communities and ourselves. So dream big!  We can all strive to think a little more like Walt Disney; find a dream, make a plan, and unite a team under one common goal. What is your dream for your community or chapter? Once you have a dream, take the steps to make that dream a reality. Come up with a plan, and then take that plan to your chapter members. Advocate to take on this project and inspire them to dream big too. It will take hard work and dedication, and at times it might seem impossible, but as Walt Disney said himself, “It's kind of fun to do the impossible...”

Stationed by the Emblem of Washington,