Leave it a Little Better 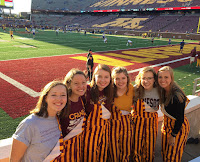 “You ain’t gotta change the whole thing, just leave it a little better.”

Since the start of school, many of my afternoons after class have been spent in my dorm room, working on homework, and listening to whatever new Spotify playlist appears on my app. Usually, it provides an excellent way to find new tunes for my personal playlists and offers good background songs for long study sessions. During one of said sessions, a phrase from Maggie Rose’s song, “Change the Whole Thing,” caught my ear. Her song laments that no matter how hard you try, change never seems to happen. No matter how hard you work, you seem to end up a little further from where you want to be. Personally, I’ve definitely felt like that before. Despite the fact that I may be trying to work hard, do my best, and enact change, I don’t seem to be going anywhere at all. The idea that one person can change this world for the better seems like a far-away fantasy, better left for someone like Albert Einstein, Mother Theresa, or Winston Churchill.

My favorite part of the song, however, is the chorus: “The world wasn't broken in a day, and it ain't gotta stay this way forever. But you ain't gotta change the whole thing, you just gotta leave it a little better.” It is so easy to feel as though, in order to change this world, we have to enact crazy, day-and-night change that everyone can see when in fact, it’s not necessarily that at all. Changing the world is the sum of small, everyday actions that seek to make it a little better.
Personally, as a freshman at the University of Minnesota, this new college life is still one I’m getting used to and trying to figure out. My first week of school as a very stereotypical, scared little freshman, some older girls I knew from FFA invited me to another friend’s birthday party. After a long day of classes, a slightly-tired-and-overwhelmed-Elaine hustled her way over to the party, arriving a solid hour late due to a very off-schedule bus. The minute I entered the door, I was immediately welcomed into this group of crazy-awesome people that I have always considered to be some of my greatest role models. After the birthday celebration, they invited me to come to their morning workouts, along with some other events, and I left that night feeling at home and like I had a place to belong.

While this sweet group of people probably didn’t change the entire world that evening (they might have but who knows), they certainly changed my world. By simply being kind and welcoming me into their circle, they changed my first week of school from one of a little home-sickness and loneliness to one of enjoying laughter, friendship, and doing life alongside them. Friends, we may not have the ability to change the entire world in a day, but we most definitely have the power to change the world of another. Whether it be taking the time to really get to know those people on the outskirts of the room, offering to help the person beside you, going the extra mile, or just offering a smile to the stranger behind you in the grocery store; small, everyday actions are what, in the end, make the biggest difference. Our job isn’t to change this world in a day; we just gotta leave it a little better.

Stationed by the Ear of Corn,
Elaine Dorn