On March 29th, 1974, the terracotta warriors were found in China. The terracotta warriors are a collection of terracotta sculptures depicting the armies of Qin Shi Huang, the first Emperor of China. It is a form of funerary art buried with the emperor in 210–209 BC and whose purpose was to protect the emperor in his afterlife. A farmer was working in his field when he stumbled upon them. Experts estimates from 2007 were that the three pits containing the Terracotta Army held more than 8,000 soldiers, 130 chariots with 520 horses, and 150 cavalry horses. These life-size sculptures were hidden underground. 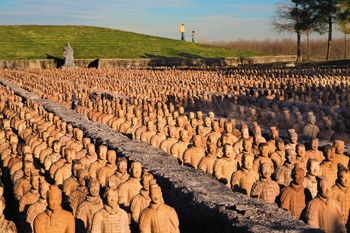 Chinese artists carved all these statues for their leader that united them all. They spent years building these works of art only to have them be buried under the soil alongside their gracious leader. Built not for the joy or introspect, but to support and protect their glorified king.
This leads me to think about who is there to support and protect me. The people who, without asking, come to support me in my life. They are here to see me succeed. For me, those people are my family, who believes in me through all of my times of trial, like college and FFA. My friends here at college who I see every day also support me. Digging deeper, I have supporters who I do not know are there until they come in to save the day. For me over the past few months, these people include past state officers that check-in with to make sure I am okay or get me laughing. We may not see our supporters all the time, but we know they are there. High school friends, coaches, campmates, and coworkers are all possibilities. Who is your hidden army? Who are the people that are beside you when times are tough and want you to succeed? Have we given love to these relationships lately?

Let’s evaluate our relationships with others. Who’s hidden army you are a part of? Who needs our support right now? How can we help them in their efforts? These could be our teammates, classmates, partners, and family members. These people need your support and love. Have we given love to these people to the best of our abilities? A text, call, or lunch with them could make all the difference to them. Everyone needs a hidden army of support and love. Who are you supporting?