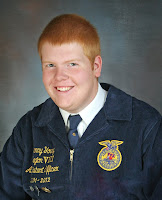 FFA Chapter: Winona
Year in School: Senior
Favorite Color: Blue
Fun Fact: Danny is a big fan of Pixar and Disney movies and Toy Story is his favorite movie of all time.

Ok. So maybe Danny isn't all of those things in the title, but he certainly is known by what he has accomplished. From being a leader in his community to his beaming personality, Danny, like so many other members around the state, is an excellent representation of what is means to wear the blue corduroy.

This enthusiastic 18 year old was introduced to FFA through his older sister who joined because of the speaking events. His friend Katelyn, and his advisor Mr. Sather also pushed Danny to excel. They encouraged him to run for office and try new things in FFA. He was pushed over the edge into liking FFA when he attended the Region VIII Greenhand Day his 8th grade year.  Originally Danny's SAE consisted of mowing lawns, however he is switching it over to his current job working for Rogan's shoes. Danny has held the offices of Historian, Secretary, and Treasurer for Winona, as well as working as an Assistant Officer for Region VIII.

Although Danny is a big fan of FFA in general, he claims that one of the pieces he likes best is all of the amazing people he has met through the life-changing organization. He has gained skills and opportunities through serving as a Region VIII Officer and being involved in a multitude of events with his local chapter at Winona. He is a vital asset to his chapter of forty and his school's officer team of eight. As an officer, Danny has been instrumental in planning and executing events such as his school's school talent show, parking cars for his county fair, a middle school visit, a petting zoo, fish fry fundraiser, corn drive, old settlers banquet, paintballing,a taco eating contest, and the Winona Chapter Banquet.

Danny is the youngest of three siblings and although he may not live on a farm, he does love the two pet dogs that his family has. Danny quotes "I am a prime example to break the commom stereotype, that FFA is just for farmers". Aside from FFA, Danny is busy with Student Council, Band, Drama, and a host of other recreational activities. To top it all off he is also a PSEO Student at the Winona State University. Danny Young is

Congratulations to this week's member of the week, Danny Young!